We sell the following floor mats for Mercedes SLS.
Please click below to choose the appropriate product for your vehicle. 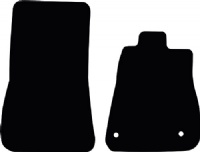 The Mercedes SLS is a car which needs very little in the way of an introduction - it’s been around for over a decade now - and over that time it’s built up a reputation not only as a high performance supercar, but also as a highly collectible vehicle.

The SLS was the first Mercedes in history to be designed entirely by AMG - the Mercedes motorsport atm. There was no restrictions for the AMG petrol heads when developing the SLS - and it took them over three years to develop the SLS. The SLS marked a step change for Mercedes, who stepped away for the first time from big engined saloon and coupe cars.

The Frankfurt Motor show in 2009 was the first time that the SLS was shown to the world - and it was an instant hit, making a massive impact. Anyone who has seen an SLS in the flesh will understand why, and the gullwing doors on the vehicle alongside the long bonnet at the front of the vehicle, means that those lucky enough to have sat in an SLS will know that sitting in the SLS will feel like you are sitting right over the rear wheels.

The engine in the SLS was also designed from the ground up by the AMG team - and although it is a 6.2 litre Mercedes engine found in other vehicles - the AMG engineers spent a huge amount of time and effort in making the engine unique - with over 120 new components being used across the full engine. The result was a V8 which creates 563 brake horsepower.

At Simply Car Mats, we are proud to have created a fantastic range of luxury carpet mats for the Mercedes SLS - which allow our customers to choose the exact specification of their car mats. Carpet thickness, carpet edging, carpet colour and custom embroidery is all available. Regardless of the options you choose, all of these car mats are fully tailored to the SLS and fit perfectly, protecting the inside of the interior whilst also ensuring that the interior of the vehicle remains looking at it’s best.

You can view the full range above, and as always - if you have any questions about the range please do get in touch and we will be more than happy to help.